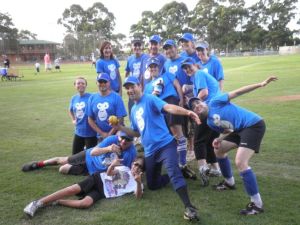 The Monkeys (Sydney) are a bunch of just that, trying to play softball as much as we can!

Here's a little bit of info below. However, please visit our OFFICAL MONKEYS SOFTBALL WEBSITE

The team formed in Sydney in 2010, by Clare and Scott O’Brien after convincing a unsuspecting lot that playing Mixed Slowpitch Softball would be fun.

The Monkeys took a significant step in June 2013, and are now officially recognised as their own club under the Sutherland Shire Softball Association!

We have competed and continue to compete in numerous leagues and tournaments including: