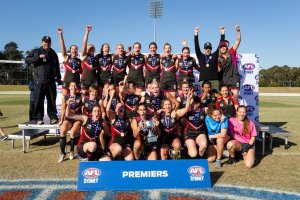 The Macquarie University Australian Football Club (MUAFC) competes in the AFL Sydney competition, with teams featuring in the Men's, Women's and Under 19's divisions.

Formed in 1969 as the "Kookas", MUAFC has an extremely proud and successful history, winning five premierships since 1998.  Between 1998 and 2000, the Men's team won a record three consecutive titles.  The club's most recent success was the Women's Premier Division Premiership in 2019, the second women's premiership for the club.

Australian Football is among the country's most popular sports, and MUAFC reflects its core values by being fun, social and competitive within an all-inclusive environment.

The club welcomes players of all ages and experience levels as it looks to continue its wave of success for many years to come.

Games are scheduled from April to August, with finals being held in September.