SIMON ROURKE SIGNS ON FOR 2012 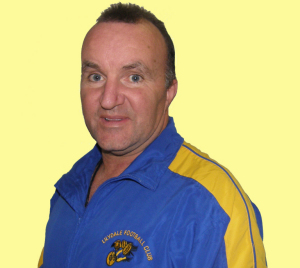 Lilydale Football Club is thrilled to announce the re-appointment of the highly respected Simon Rourke as its senior coach for the next season (2012). In making the announcement this week, President Graham Reynolds said that the club was thrilled that Simon was again "on board" after coaching the Dales to the Second Division Flag in 2011. Simon said he is keen to continue putting in the work necessary to get the Dales back up and competitive in First Division. But, said Graham and this was reinforced by Simon, we are under no illusions that the job will be easy. We have played off in the finals before but have not progressed past the first week yet. Our initial aim will be to consolidate and aim for the finals. We will monitor progress in this objective and take it from there. But as we have said before we are a proud club and with Simon at the helm and a new Committee after the AGM on Tuesday 4th October, we will be doing the hard yards necessary. So get on the Falcons Train AGAIN in 2012.

For full details of the Football Department for season 2012 click here for the contacts page.

Click HERE OR ON ABOVE LOGO to find out more

If you don't have a smartphone you can get notifications in your email and access the club's Team App website to view all the info on the App and MORE as the website can cater for such features as videos which the phone app cannot.