AFL Womens to debut on TSN 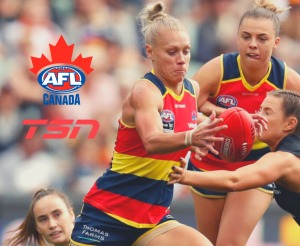 Australian Football fans in Canada will have even greater access to professional women’s sport this year with TSN introducing AFL Women’s to its schedule.

AFL Women’s – the highest level of women’s Australian Football – has gone from strength-to-strength in recent years, with increasing viewership reflecting the quality of the competition.

AFL Canada Development Manager Jacob Haeusler said the introduction of AFL Women’s to TSN was another coup for Australian Football in Canada.

“These are some of the greatest sports stars in the world and I promise that Canadian viewers will be impressed with their skill and athleticism.”

Canadians had more access than ever to Australian rules football in 2020, with TSN airing up to six AFL men’s matches per round during the pandemic-affected sporting calendar.

“We had new fans due to last year’s increased presence of AFL men’s, and we expect the same with AFL Women’s,” Mr Haeusler said.

“As well as increasing our fan base, we hope the promotion of another women’s sport on TSN will show aspiring Canadian female athletes of another pathway to professional sport.”

TSN Direct is simple to access, using your provider's details to log in. AFLW games shown on TSN will also be available on TSN - On Demand for a week following the airing.