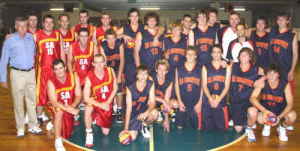 The game co-incided with the training camp for SA Country Basketball's preparation toward the U/18 National Championships.

The saturday evening game held 14th March 09, was a popular event with many locals and members of neighbouring associations in attendance.

SADB was determined to avenge the loss last year, where after a close 3rd quarter, the game was lost in a country dominated 4th. This year SADB attacked from 15-odd down earlier in the game, to draw level in the final stanza. SA Country claimed a narrow four point victory, that places them in good steed for their upcoming Championships.