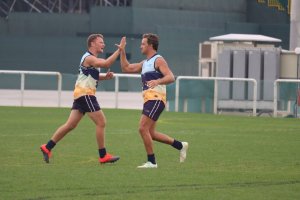 With two rounds to go in the 2019/20 AFL Middle East competition, the Multiplex Bulls stand as favourites to complete back to back premierships. Nothing is guaranteed, but their 103 point demolition of the Dubai Dingoes sent an unnerving message to the rest of the competition.

The greater interest centres on the two teams most likely to play off to meet the Bulls on Grand Final day. The Abu Dhabi Falcons defeated the Dubai Dragons in a tight clash, putting them two games clear in second spot. They have booked a Preliminary Final berth, at least, but importantly they have the psychological advantage over the Dragons for next time they meet – likely in the first final.

Round 4 action at The Sevens Stadium in Dubai saw the Dragons and the Falcons play out three intense and tight quarters. However, a six goal third term from the Falcons took the game away from the Dragons. True to form, the Dragons fought hard to come back in the final quarter, but could not bridge the gap.

In the other match, after a tight first quarter, the Bulls ramped up the pressure over the next two quarters before a withering ten goal to nil final term. That quarter alone will be something all clubs will be mindful of – the power of the Bulls when they unleash.

The Round 5 matches will sort the logjams. Currently the Bulls and Falcons sit on three wins apiece, whilst the Dragons and Dingoes have one apiece. The Dragons and Dingoes meet each other in a game that will likely decide the wooden-spooner for the season. In the other match, The Falcons host the Bulls in Abu Dhabi. The Falcons will be out to win at home and grab top spot – they have won both of their games at Zayed Sports City this season, so will be hard to beat.

Round 5 will be played on Friday 7th February.