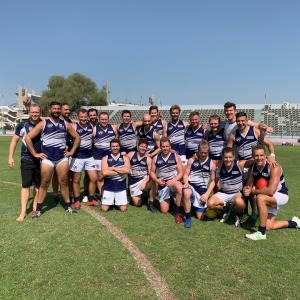 Winning your opening two matches in a season is no guarantee for success at the pointy end of the journey. However, it is a huge advantage in a six-match season. Two wins from two is a solid foundation for success, and the Abu Dhabi Falcons are in a great position to achieve bigger things this season.

Their victory over the Dubai Dragons at Zayed Sports City in Abu Dhabi has seen them win two from two so far this season. This result is more compelling when their two biggest hurdles to success – the Dragons and Multiplex Bulls – have each lost a match.

The Falcons have a tough run over the next three matches – meeting the Bulls twice, and a return clash with the Dragons in between. It is possible they lose all three. But, one win across that streak, and a final round win over the Dubai Dingoes, might set the Falcons up for their best flag tilt since they took the title in 2011. They would likely need to reach the grand final via the preliminary final, but would do so knowing they have beaten quality opposition along the way.

In the other game, the Bulls, fired up after their Round 1 loss, turned their attention to the Dubai Dingoes. The Bulls made their statement early, going to the main break with a 45-point lead and having effectively made the result a certainty.

The lead had ballooned out to 59 points by the final change before a rampant Bulls’ outfit ran riot in the final quarter. The final margin saw the Bulls win by 97 points.

The teams have one more round prior to the mid-season break. In Dubai, the local derby between the Dragons and Dingoes will kick off the double-header at The Sevens Stadium, followed by the important clash between the Bulls and the Falcons.