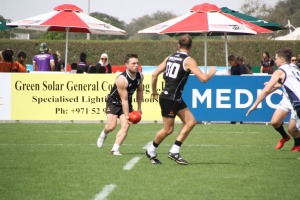 The journey isn’t over yet. The Multiplex Bulls’ victory over the Dubai Dragons yesterday does not win them the AFL Middle East premiership. But it goes a long way towards gaining the belief and commitment to needed to claim their first flag.

Make no mistake, the Dubai Dragons would know that this match was a massive statement. If they won again, the Bulls would sink further into an inferiority complex, doubting their ability to ever beat the Dragons when it mattered. A Bulls’ win was going to set the Bulls into a momentum that might not be stopped.

By quarter time, the Dragons were a goal in front. Way too early to pick a winner, but they had played their hand again, inviting the Bulls to play theirs. They did, grabbing the half time lead by three points but knowing a battle still needed to be won.

The shift came in the third quarter with the Bulls kicking four goals to two to open up some breathing space. Leading by almost three goals at the final change, the Bulls knew the Dragons would come at them. But they stood firm and won by 13 points to grab top spot – important this season as it avoids the cutthroat battle between second and third in the finals.

The Abu Dhabi Falcons made their claim for third place and a finals berth by downing the Dubai Dingoes. Their win got them off the bottom rung of the ladder, and with a far better percentage that the Dingoes, the Falcons should remain in third place.

The Falcons already have a far better percentage than the Dingoes, so barring a miracle (the Dingoes beating the Bulls in the final round) all they have to do is perform well enough against the Dragons and not take a big percentage hit. Last time the two teams met, the Falcons were unlucky losing to the Dragons by two points. It is not out of the realms of possibility that the Falcons could win.

As far as the top two teams go, the Bulls and Dragons would be heavy favourites to win their final round matches as above and finish equal on five wins apiece. Only a slightly better attack keeps the Bulls ahead of the Dragons on percentage. Their scores against are identical. For the Dragons to steal top spot they need to win by a bigger margin than the Bulls are likely to and bridge the six or so percent differential. A tall order, but anything can happen in a final round.

However, after five rounds, the Multiplex Bulls know they can beat the Dubai Dragons, and that’s a huge piece of knowledge.