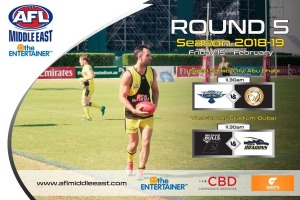 It could turn out to be a season defining moment – or a few moments, really. The clash between the AFL Middle East heavyweights, the Dubai Dragons and the Multiplex Bulls. One team is on track to claim its fifth consecutive flag. The other is out to avoid the indignity of being runners-up for a fifth consecutive season.

It may sound harsh, but the time has passed for the Bulls to say they were gallant in defeat. That was true early, and possibly even extended to last season. But gallant isn’t enough now. Years of hard work and sacrifice by many people have to be rewarded with a maiden flag.

That is what makes this Friday’s battle in Dubai so important. The Bulls simply must prove that they can defeat the Dragons. They cannot rely on waiting and hoping for a crack on grand final day – it isn’t yet guaranteed they will get that far. The assertiveness that goes with premierships has to start Friday and then extend through the finals series.

The Dragons are not a benevolent society. They will not simply stand back and allow another team to usurp them. The Dragons are the clear dominant predators of the AFL Middle East and plan to stay that way. Hence the need for the Bulls to find cracks in that Dragon façade. The Dragons won’t be “nice” just to make the Bulls feel better.

The other game down in Abu Dhabi is equally fascinating. A finals spot is in the air. The Abu Dhabi Falcons hold the upper hand with home ground advantage. However, the Dubai Dingoes have a win up their sleeve whilst the Falcons are winless. But the battle for third place (and a finals berth) could come down to percentage.

To put the clash in perspective, the Dingoes meet the Bulls in the final round whilst the falcons play the Dragons. It will be a huge upset (or two) if the Dingoes or Falcons win their final games. So, this match on Friday may be the decider. Despite the Falcons being winless and a game behind the Dingoes, their percentage is a massive 12 percent higher than their competitor.

Quite simply, the winner of the game is likely to steal third place and a finals berth.

It promises to be a huge round with four teams motivated to give their absolute best.