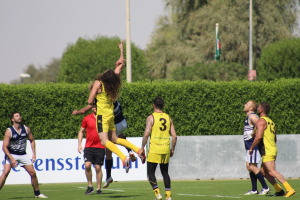 We enter round 2 of the ENTERTAINER 2018/19 season with a somewhat unusual and unexpected, yet rejuvenated Dubai Dingoes, on top of the ladder after they fought a strong first win of the season. We find the Dubai Dragons sitting second after they had a nail biting win against the Multiplex Bulls last weekend. This leaves both the Bulls and the Abu Dhabi Falcons sitting on the lower end of the ladder with the Falcons sitting outside of the top 3.

Looking ahead to the week of football, the Dragons head south to the Capital to take on the Falcons for their first home game of the year. The Falcons took away from last week that inaccurate kicking can hurt. Whilst keeping the Dingoes nearly scoreless in the second quarter - which is a great effort, we also saw the Falcons kicking 2 goals 5 behinds. If they can avoid this against the Dragons, it will definitely place pressure on the reigning premiers. Scott Longman and Josh Walker will be the men to watch from an attacking perspective after kicking 2 goals each for the Abu Dhabi side, whilst Pete Campbell and Mick Davidson demonstrated how they could influence their side’s ability on the field leading the best on field.

The Dragons have made a strong start to the season and hope to head down to the Capital to bring back the four points. The Dragons stood tall and demonstrated why they were the reigning premiers with the lead up target Daniel Gribbin booting 7 goals to take the lead for the goal kicker of the year. Daniel was well supported by the likes of Jimmy Hedrick who kicked 2 goals and will be looking for this support again. Under new leadership, the newly appointed captain Luke Byron led by example and was named amongst the best while big man Spencer Whitaker led from the middle with a consistent performance from the ruck.

Straight after the match in the capital, attention will switch to the The Sevens Stadium, where the Bulls and Dingoes will face off in their second appearance together. The dingoes will be fighting to maintain their position on the ladder whilst the Bulls will be looking to have a repeat performance similar to what they had in Bahrain earlier this year.

The Bulls lost a close match against the Dragons last week and will be seeking to settle any frustrations that they may have, against the Dingoes. But signs are promising nonetheless with the likes of Nathan Holly and Ted Stobart leading the Bulls last week with 9 goals between them. Joseph Yodgee, Cam La Fontaine and Alex MacQueen combined together on the field to take the challenge up to the dragons and will be key players to watch this weekend aswell. The question and challenge for the dingoes will be, which area to control to gain that winning advantage of one of the premier sides of the competition.

That Challenge will be well met though with the Dingoes demonstrating they are here to play this year with strong numbers and a new game plan. The Dingoes led three out of four quarters last week and gained their win through hard efforts in the premiership quarter. The Dingoes kicked four goals to two in the third setting them up for four goals to three term in the last. Captain Ben Dawson led the charge kicking five whilst gaining strong support from Jess Mcguick who kicked 3. The on field performers included Jackson Litchfield and Billy Buckley who led the Dingoes to their first win of the year.

Did you know that ENTERTAINER 2019 HAS ARRIVED?

The best things in life are...Buy One Get One Free.

Enjoy thousands of 2-for-1 and discount offers.