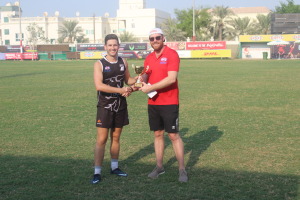 Having been on the receiving end of consecutive premiership defeats now for too many years, the Multiplex Bulls needed some success to believe that they can turn their fortunes around. In Bahrain yesterday, the Bulls achieved just that by taking out the AFL Middle East Pre-Season Cup. It isn’t the same thing as a premiership, but it is a result that sparks belief and confidence and sets a strong platform for what will follow.

On a hot day in Bahrain, the Bulls played in a three-way round robin tournament against their nemesis, the Dubai Dragons, and a combined Dubai Dingoes/Bahrain Suns team. The drinks tables, air conditioners and shady spaces got a heavy workout as the teams slugged it out.

The opening match saw the Bulls up against the Dingoes/Suns unit. From the outset, the Bulls looked the stronger team, and their use of “supergoals” from outside 50 (worth 10 points in Bahrain) saw them run out comfortable winners by 56 points, setting up a grand final chance immediately. Final scores saw the Bulls with three super-goals winning (3) 10 5 95 to the Dingoes/Suns (1) 4 5 39.

Next up was the clash between the two league heavyweights – the Bulls and Dragons. By half-time, the Dragons again held sway, ahead by four points. Inaccuracy cost both teams in a tight defensive game, but by the final siren it was the Dragons winning well (0) 4 7 31 to the Bulls (0) 1 6 12. Early signs pointed to another Dragon title.

The final saw the almost ubiquitous meeting of the Bulls and Dragons. Despite going down the Dragons earlier in the day, the Bulls came out breathing the kind of fire you would normally associate with Dragons. Jumping out of the blocks against a Dragon outfit that, admittedly, had just player two back to back matches in the Bahrain sun, the Bulls raced to a 24-point half -time lead. Almost, but not quite, unassailable in the conditions.

However, the second half belonged to a very stingy Bulls. Allowing the Dragons a single goal for the half, the Bulls extended their lead to run out pre-season premiers by an impressive 50 points. The final score saw the Mutiplex Bulls (2) 8 6 74 defeat the Dubai Dragons (0) 4 0 24 to hold aloft another piece of silverware – and hopefully their entrée before the main course at season’s end.

The Dragons don’t have to wait long for a rematch with the Bulls, with Round 1 of the AFL Middle East season kicking off on 9th November with a double-header in Dubai. The Dragons and Bulls lock horns again whilst the Dubai Dingoes will meet the Abu Dhabi Falcons.