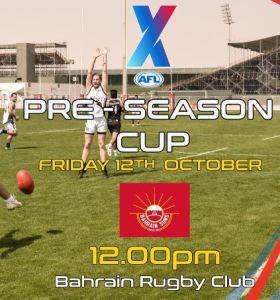 After plenty of hardwork behind the scenes the Pre-Season Cup in Bahrain will be hosted on Friday October 12, 2018 at the Bahrain Rugby Club.

All clubs will be represented in the Cup. Multiplex Bulls and Dubai Dragons will enter full teams while the Dubai Dingoes and Abu Dhabi Falcons will both use players from Bahrain to make the Cup a 4 team round robin competition.

The Competition currently stands at 6 games with a final to be played at the end.

The format is based on AFLX and teams will be made up of 10 players which will include 7 active playing members and 3 interchange players. The field arrangements are 2 forwards, 3 midfielders and 2 defenders with 3 on the bench.

"The Cup will go a long way to help the progression of the Bahrain Suns and it is fantastic to see all the clubs get behind the event" said Matt Burn, AFLME - General Manager. Burn also had praise for the brains behind the day - "this event would not be possible without the hardwork of newly appointed AFLME Operations Manager, James Larkin and Bahrain Suns Manager, Shannon Crockett".

Who will bring home the first bit of silverware for the season?