History will be created 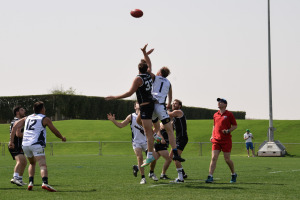 Dubai Dragons go into Friday’s AFL Middle East Grand Final bidding to capture a sixth title in seven years when they face the Multiplex Bulls at the Sevens Stadium.

This is a repeat of last year’s decider which Dragons won in a very tight match, but Bulls have grown in confidence and look a more composed outfit since their maiden season in 2015.

The teams have met twice this season, with the Dragons prevailing on both occasions, but both were in tight contests with the defending champions winning by a combined margin of only 29 points.

And if the Dragons can attain the same level of dominance around the middle this weekend, they will be hard to handle.

With Nick Kissane, Spencer Whitaker and Travis Hayward pulling the strings from defence to midfield, they have the opportunity to unleash the significant qualities of Ryan Perkins in attack.

“We’re confident that if we play with the intensity and teamwork that we’ve shown all year, we’ll be a very good chance.

“We’ve enjoyed the rivalry we’ve built with the Bulls and it seems to get bigger and bigger each year.

He added: “Make no mistake, we know the Bulls will be throwing everything they’ve got at us and whichever way it goes it’s going to be a brutal contest.”

This should be an enthralling, tight game, with Nathan Holly’s Bulls sure to be resilient.

In many ways they have looked a more effective team since losing against their rivals in round two and five, hammering Abu Dhabi Falcons and Dubai Dingoes by a staggering combined 140 points in their past two fixtures.

In George Rahhal, Nick Burchell, Jack Egan and Ted Stobart, Bulls have key men who pose a threat with and without the ball.

“Following the round five loss to the Dragons we’ve had 20 plus players to every training session which is encouraging in itself,” said captain and coach Holly.

“Then to go on and play the way we did in the final round of the season against the Dingoes really showed how much this group of guys want it this year.”

“With nothing to lose this year I expect to see the guys play with more confidence and convert the chances that we’ve missed in prior grand finals.

“With the rivalry as strong as ever, we expect a highly skilful game that the supporters from both sides will enjoy.”