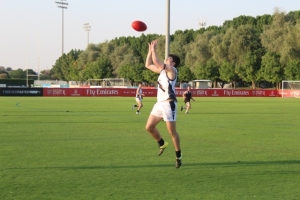 After a week break, AFL Middle East returns for Round 5 on Friday with a Dubai double-header being played out at The Sevens Stadium.

Kicking off proceedings at 11:30 will be the season’s second edition of the Grand Final rematch with the Multiplex Bulls facing off with the Dubai Dragons. Last time they met in November the Dragons were
victors by only 11 points and this match is set to be another tight tussle.

Both squads look to be at full strength and the Bulls are sure to come out firing to try and lock in their fourth consecutive Grand Final in a row. George Rahhal took the honours against Dragons’ main man up front, Ryan Perkins, last time out and another performance like this could see the Bulls get over the line.

The Dragons have already secured a Grand Final birth and will be wanting to take the edge with a win into the big day on March 16.

In the later game at 13:30, the Dubai Dingoes play host to the Abu Dhabi Falcons from the capital. Dingoes are desperately searching for their first win of the season and will be throwing everything at the Falcons, who would keep their slim Grand Final hopes alive with a win, but this is only if Bulls lose in the first match of the day.