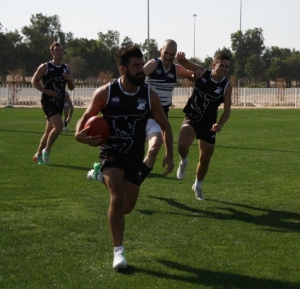 AFL Middle East kicked back into the action over the weekend with round four hosting two entertaining matches.

In the major game the Abu Dhabi Falcons hosted the Multiplex Bulls with Grand Final qualification on the line.

Conditions were windy down in the capital and this showed in the quarter by quarter scores.

The opening quarter was very tight with neither side able to find a goal, and it remained tight in the second quarter with the Bulls taking a small seven-point buffer into the half.

For the visitors big man Nick Burchell was dominant all day in the ruck which made life easier for the Bulls midfield brigade of Jack Egan and Joseph Yodgee. Ted Stobart up forward was also his usual “dead-eye” self kicking three goals.

While for the Falcons Zac Moon stood up as always in the midfield and up forward but his efforts, combined with veteran Stephen James, were not enough to get the Falcons over the line.

It was rough justice for Abu Dhabi’s finest who have been the most improved team in the AFL Middle East this season. They have just one win from their four starts, but have been more than competitive in their losses to the Bulls and Dragons.

In the rounds other match the Dragons made light work of an under-strength Dingoes in the Dubai derby running out winners by 93 points (25.9.159 to 10.6.66).

Round five on Friday February 16 sees a double header at The Sevens with the Grand Final re-match between the Bulls and Dragons at 11:30 before the Dingoes look for their first win of the season against the Falcons at 13:30.