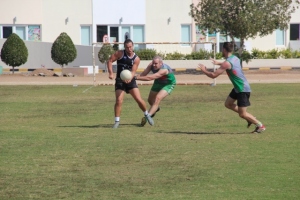 The first ever International Rules match was played in Muscat with the Multiplex Bulls taking on GAA Oman in an exhibition match.

Hosted by the Sultan’s School, Seeb, 20 Bulls players made the trip from Dubai to play the landmark match, which is a hybrid of Gaelic football and Australian Rules, on Friday.

The GAA team was made up primarily of all Irish ex-pats, plus two Omani’s and three guest players from AFLME’s Dubai Dragons. There is a close link between Oman and the AFLME as the GAA still include Muscat Magpies Aussie Rules as a part of their club, although the Magpies have not taken part in the league since 2014.

The game was played in great spirit with both sides taking some time adapting to the new format. The main difference for the Bulls was playing with the round ball and for the GAA it was getting used to the heightened physicality of tackles.

It was tight for the majority and the Bulls headed into three-quarter time with just a six point lead. But the final stanza saw the UAE side score some crucial “goals” (worth six points and scored when the ball hits the back of the net) and they ended up winning 6.5.16(67) to 2.8.10(46).

Will Cook in goal for the Bulls was crucial to the win, making four to five big saves, while Ted Stobart and Joseph Yodgee were the difference up forward scoring five goals between them.

For Oman, Kieran Sheridan and Paul Early were the key players who got the “Irish” back into the game and were also helped by Australian Luke Byron who was impressive in his first ever game with the round ball.

Locals Rashid Alsawafi and Hamdan Ali Almaamari also did their home country proud, proving to be vital up forward in the second half.

AFLME GM Matt Burn said: “All in all it was a great hit out for both teams, with leaders from both clubs expressing how pleased they were to see their respective players test their skills and ability in the respective ‘foreign’ rules format. I am really looking forward to expanding this format so all teams from AFLME can take part in the future.”

Lance Scott from GAA Oman added: “The Muscat Clann Oman club wishes to extend their thanks and gratitude to the Multiplex Bulls who travelled down to Muscat in making this fixture possible and successful.”

Andrew Walters, Bulls Team Manager said: “The Bulls were absolutely wrapped to play the Muscat boys in the combined format.” “The game moved so quickly and was played in a great spirit. The Irish boys carried the ball really well with some silky skills. We were happy to grab the win but the Gaelic guys definitely gave us a scare.”

The long term aim of the match was to get the Muscat Magpies to rejoin the AFLME in 2018-19, playing the compromise rules format.

Further discussions will hopefully end with the Magpies being involved next season. AFLME will resume on February 2 with Dingoes playing Dragons and Falcons playing Bulls.