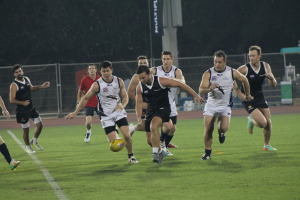 Round two of AFL Middle East kicks off this weekend with two tantalising clashes, including the Grand Final re-match between the reigning premiers, Dubai Dragons, and the runners-up, Multiplex Bulls, at The Sevens at 15:30 on Friday afternoon.

But first up in the morning, the Abu Dhabi Falcons and Dubai Dingoes will be looking for their first wins of the season when they meet at Al Forsan International Sports Resort in the capital.

The Dingoes will be hoping to bounce back after their 99-point shellacking to the Bulls in the opening round while the Falcons were gallant in defeat to the Dragons and go into the match, which kicks off with the dew still on the ground at 10.00, as favourites.

Later the same day at The Sevens, the Bulls will try to avenge last year’s Grand Final defeat in the big clash of the weekend.

An intense rivalry has been building between the two clubs since the Bulls entered the competition in 2014 and Multiplex come into the game as favourites after their 121-22 thumping of the Dingoes.

The black and white trims will be desperate to get a small dose of revenge for the heart-breaking Grand Final loss back in March. Although the Dragons took the honours in last year’s big show, it was the Bulls who were comfortable winners by 35 points in the corresponding fixture last year.

The Dragons are a new look outfit this season, with seven players making their debut against the Falcons, and questions are being asked whether they can gel quickly enough to get their season off to the perfect two-two start.

Against the Falcons the Dragons took three quarters to get going before running out 76-49 winners, and if they allow the rampant Bulls any start this week it will not be an easy task to claw them back.

The Bulls will look to non-stop midfielder Jack Egan and marksman Jimmy Johri to keep the scoreboard ticking, while for Dragons captain Ryan Perkins will be hard to stop and full-back Will Cox, in his last game for the club, will line up on Jon Hickey in a key match up.

Article by Alex Broun from www.sport360.com