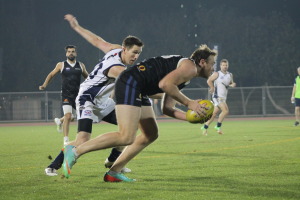 It was their destiny. The Multiplex Bulls entered the 2016/17 confident that it would be their season. It would be their breakthrough premiership – their reward after having already felt the pain of four premiership defeats in previous seasons. Admittedly, one of those was a pre-season cup in their inaugural season, but they still hurt.

Last season it was the Bulls first into the Grand Final and they waited as the Dubai Dragons won their way into the final clash of the year. However, this year it would be the Bulls – finally.

It was not. They went down by just a goal. Not only were the Bull’s hearts broken again, but the margin was further salt into raw wounds…so close and yet so far.

The Bulls now have a new season ahead of them, but acknowledge how much the club hurts. According to the club, “the Bulls were gutted last year to not take the prize, but we are looking forward to another strong and successful season. We have been training in some pretty awful summer conditions since August.”

“This year we have had to say goodbye to some greats of the club including Andy Campbell, Andrew Buckthought, Rob Moffatt and Ben Chater, who have all hung up the boots. We have been lucky to replace them with some great new guys who have been training the house down.”

Whatever happened in the past has to be let go. At least, let go in the sense of casting aside the disappointment. Now the club has to channel their energies into chasing success and use their shared hardship as motivation to take the next step. If anything can be gained from three successive premiership defeats it is the knowledge that the club – their list, their philosophies, their performances – is heading in the right direction and has what it takes to win a flag – almost.

Round One is now just 12 days away. Redemption is almost at hand, and the Dubai Dingoes will be first to feel the wrath of seething Bulls.

“We are really looking forward to kicking off Round One on Thursday the 19th of October against the Dingoes. It is always a tight contest!”

It will be a massive season for the club no matter what, but they are ready for the next challenge in their short but impressive existence. Now, nothing less than a flag is acceptable.