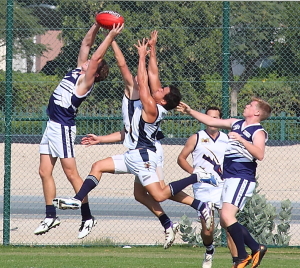 The new 2017/18 season for AFL Middle East is now ready to roll into action with the release of the new season draw. All eyes will turn to Dubai on the 20th October with the first of three “double headers” in the city. Other features for the season include eight matches per team for the Dubai based clubs and a special provision for the Doha Kangaroos.

Bahrain will not enter the league for this season. Instead, they will use the season to recruit and be ready to re-enter for the 2018/19 season. The Muscat Magpies will not enter a team, focusing on Gaelic Football instead. However, to borrow from James Bond – “never say never again”.

The new season will not feature a pre-season cup competition – the focus placed instead on extra rounds for points across the season.

In a unique more, the Doha Kangaroos will only play four matches this season. Travel restrictions make it tougher for the Qatar team to fly, so each will be a home game. As an inducement for all clubs, each match against the Kangaroos will be worth eight points instead of the usual four. Not only will this provide motivation for the Doha club to fight for their wins, but it also means that a loss to Doha could severely damage any other club’s ladder positions. Matches against the Doha Kangaroos will be premium matches for points with much now at stake.

Whilst majority matches are currently fixed into Friday afternoon timeslots, provision exists for some rounds to be moved to Thursday nights if required. The draw is as follows:

In the lead-up to the new season, World Footy News will feature some stories about each club’s new season – their pre-season preparation, changes to player lists and dreams for the new season.