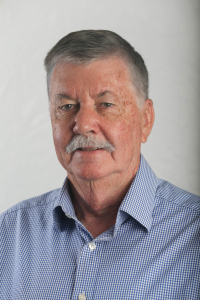 The SACBC was formed in 1974 and John became the Whyalla delegate soon after. He was also the Whyalla President and head of the committee that built the Whyalla Stadium.

He and future Adelaide 36ers Coach Mike Osborne were appointed to organise the first ever fully representative State U16 boys’ team in 1975.   That meant numerous trips throughout the state every weekend to ensure a strong team was formed. With no Internet or Mobiles the communication lines were letters and landline phones and John spent numerous hours in country phone boxes communicating with associations and players. He acknowledges the enormous administrative leadership of Beth Serle in those days, with the Council having limited resources and a miniscule budget. In that year John was appointed as Vice President of the SA Country Basketball Council.

John moved to the ACT and subsequently coached at seven Australian Championships, two club championships, became a Board member of the Canberra Cannons and hosted the first one hour TV basketball program in Australia, Hooked on Cannons. This show received an NBL award in1983.

Back in South Australia, John and partner Maureen organised both the 30th and 40th Anniversary celebrations for SA Country. He represented Far West again on the Council Executive.

As a Defence Force Basketball Coach of many years, he initiated the SA Country U18 annual games against the SA Defence team, now in its 12th year.

As a member of the History, Honours and Awards committee of the Basketball SA Commission, John formulated and wrote the initial policy for honouring and awarding all SA Basketballers. This was long overdue as no one had been recognised with a Basketball award for many years. The Hall of Fame Dinner this year resulted in many overdue awards being presented with more to come next year.

John researched the life and immense basketball contribution of Noel Woollacott and presented a video of his life story at the Hall of Fame dinner.

He has thoroughly researched the early history of SA Basketball from its first game in 1897,

He has almost completed a Documented History of SA Country Basketball 1907 – 2017. This

will be also recorded on a 20 minute video.

These 3 videos along with a future video on Woollacott Medal winners will be available for viewing at the new House of Basketball when the Basketball Museum opens.

He acknowledges the immense contribution of many Country Council members and others who have made SA Country Basketball successful. Standouts include The Stringer extended Family, Bert Bargeus, Beth Serle, Sharon Venn, Cathy Warren, Ivan and Carlene McMahon, Roger Hammond, and those incredible Coaches Mike Osborne, Peter Seebohm, Trudie Ireland, Glenn Mathieson and Paul Salter amongst many others.

He is also thankful for the support of Whyalla Basketball’s Jeff Spry, Darren Hoffman and Pat Kemp and their Committee members.

He is a life member of two associations, a Hall of Fame member for another, and currently runs the U/23 M program for Southern Tigers.

In the Basketball game of Life, John reckons it is only three quarter time with the best quarter to come.