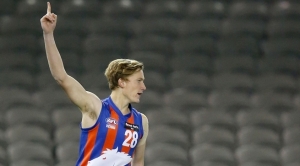 One scintillating 10-minute patch of football this year demonstrated just how dangerous Oakleigh Chargers key forward Patrick Kerr can be.

The 194cm Glen Iris product played in Oakleigh’s 2015 TAC Cup premiership victory as a 17-year-old, but truly came of age representing Vic Metro in the 2016 NAB AFL U18 Championships.

With Metro trailing South Australia by 35 points at the final change in Round 3 of the Championships, Kerr brushed aside the fact he’d only managed four behinds in the first three quarters to slam on four goals in 10 minutes and help spur his team to victory. He subsequently earned selection in the U18 All Australian forward line and was also named in the TAC Cup Team of the Year after kicking 12 goals in eight games for the Chargers.

How have you been selling yourself as a footballer to AFL clubs in interviews at the Combine?

“I try my best to play it down; I don’t like pumping up my own tyres. People say I’ve got an alright mark so I try to say I do, and I can kick a goal so I say I might be able to.”

What is the strangest question you’ve been asked by an AFL club?

“Probably what is the most embarrassing thing I’ve ever done. It took a while to think of a few because I’ve done a couple!”

Which AFL players do you particularly like to watch and model your game on?

“(Adelaide’s) Taylor Walker would be one – just his presence, his ability, and his leadership is something I like about him and I aspire to. (Geelong’s) Tom Hawkins as well, being a key forward – I like to watch him pretty closely and see what he can do.”

How do you think your year turned out relative to your pre-season expectations?

“I probably exceeded the expectations I had. I didn’t think I’d achieve most of what I did. It was good to reset the goals each time I achieved one. It was a big year mentally and physically, but I got a lot of enjoyment out of it.”

Describe how you were feeling during your four-goal final quarter in Vic Metro’s win against SA in the U18 Championships.

“It was different; I hadn’t experienced it before. I was very nervous going into the game and it probably showed in the first three quarters – not being able to kick sitters – but it finally turned. I had to show a bit of persistence. I could’ve cracked it and carried on a bit in that last quarter, but I stuck true and restored the faith of the coaches for picking me in that game.”

Talk about why you think your teammates at the Combine are so highly rated.

- Josh Daicos: “He’s a superstar. He’s kicked me the ball a lot of times this year.”
- Taylin Duman: “He plays off half back and does his best to give me the ball. If not, he’ll probably kick them (goals) himself.”
- Jordan Ridley: “He’s got a lot of potential. He has good skills and can use both feet – he sits the ball out in front for me, so I’m more than happy for him to be on the same team as me in years to come.”

Who’s your tip for the no.1 NAB AFL Draft pick?

“Josh Battle will be the one to go no.1, I think (said with Battle standing nearby). His forward prowess will be something recruiters would be loving.”