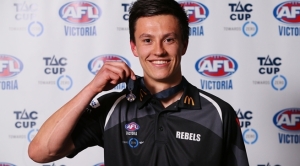 Every young footballer’s dream is to be drafted into the AFL. For 18-year-old Hugh McCluggage from South Warrnambool, that dream might soon become reality, as James Szabo writes.

The North Ballarat Rebels midfielder stamped himself as a star of the TAC Cup by recently winning the 2016 Morrish Medal for the competition’s best and fairest player, the first awarded to a North Ballarat representative since the club’s establishment in 1993.

Current and former AFL stars such as Adam Goodes, Drew Petrie, Brad Sewell, Clinton Young and Jeremy Cameron are all products of the Rebels, but none were able to win the Morrish Medal.

McCluggage’s footballing journey took flight after making the move to Ballarat from his family’s dairy farm over two hours away. The decision to change lifestyles in order to give himself the best opportunity to make it as a footballer has proven a sound one.

“It’s (the Morrish Medal win) pretty surreal, very humbling – and I’m very privileged to be announced as the best player of such a good group of boys,” McCluggage said.

“I’m very privileged to be the first player from North Ballarat who’s done it.”

McCluggage said winning the award was unexpected, with his main focus for the year to help his teammates at all costs.

The youngster’s off-field maturity is a trait he carries with him on the field too.

McCluggage’s commitment to his teammates – along with his outstanding performances – have helped him rise above his talented contempories to become arguably the best U18 player in the country.

The goalkicking on-baller polled 16 votes from just 10 TAC Cup matches, averaging 29 disposals per game and slotting an impressive 23 goals, while he also made an impact representing Vic Country in the NAB AFL U18 Championships, winning Country’s Most Valuable Player award after averaging 20 disposals per game and kicking seven goals in four matches. His performances also saw him selected in the U18 All Australian team.

McCluggage’s silky skills and goalkicking ability may have caught the attention of recruiters, but they aren’t the only ones to have noticed him this year, with opposition players also starting to give him some extra attention.

McCluggage, however, simply approaches it as an opportunity to get better.

“I see it as a bit of a challenge, but as ‘Fitzy’ (North Ballarat head coach Gerard FitzGerald) says: ‘If you’re getting a bit of attention then it’s a compliment to you’,” McCluggage said.

“It’s obviously hard and you’ve got to be accountable as well. So I see it as a challenge and it just means I’ve got to work harder and harder.”

McCluggage’s time with the NAB AFL Academy, the Vic Country squad and the Rebels in 2016 has given him a solid grounding to potentially make a big impact at the elite level.

“They all work together really well (AFL Academy, Vic Country and Rebels programs), so you sort of intertwine between the three of them,” McCluggage said.

“You learn different things and you take them back to North Ballarat.”

While McCluggage wasn’t able to help the Rebels progress past the TAC Cup Semi Finals, his humble character, maturity and professionalism should ensure any AFL club that picks him up will know one thing for sure: He’ll put the team first.