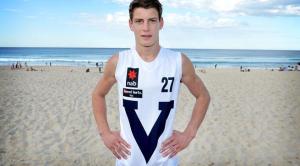 Vic Country continued its unbeaten record against Vic Metro in NAB AFL Championship football in 2014, with a win today in the U16s on the Gold Coast.

Following on from two wins in the U18 Championships, Country made it 3-0 against Metro, fighting back from a 19 point deficit at quarter time.

Ben Ainsworth and Shannon Beks were the key to Country's win, kicking four goals each. Early goals to both in the third term gave Country the lead for the first time in the game, as they kicked 11 goals to Metro's four after quarter time.

While Metro won the disposal count, the efficiency of ball use by Country was a highlight, best exemplified by Beks when he kicked his fourth goal halfway through the final term - his stats to that stage reading five kicks, five marks, four goals.

Will Brodie amassed 30 disposals, with 8 inside 50s, and was the leading ball winner for Country along with Jarvis 19, Renooy 18, Witherden 18, Darcy 17 hitouts and Simpkin 8 tackles.

Jordan Gallucci was the standout for Vic Metro with 28 disposals and two goals, ahead of Clarke 27, McGrath 25, Bunker 21, 9 tackles, Roughsedge 21 and Magbegor 12 hitouts.

South Australia claimed its third state title of 2014, with a clean sweep of the U16 Championships earlier today with a 14-point win over WA. SA added the U16 title to its U18 and state league titles this year.