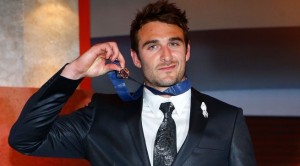 The 2012 Brownlow Medal has provided a great insight into the dominance of former TAC Cup players in the AFL competition.

This year’s Brownlow Medallist Jobe Watson was joined by seven other former TAC Cup players in the top ten vote getters on the evening.

The Essendon Captain was recruited from the Sandringham Dragons with selection No.40 overall in the 2002 NAB AFL Draft under the father-son rule by Essendon.

The versatile midfielder made his run early in the evening, polling in 12 of the initial 13 rounds to sit on 23 votes due to Essendon’s fine form in the first half of the season.

Watson won with 30 votes, ahead of Trent Cotchin and Sam Mitchell who trailed by four votes at the conclusion of the count.

At 27 years of age, Watson equalled a Brownlow Medal record by polling in 14 games, including six best-on-ground performances.