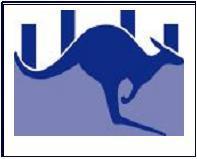 The Grand Final day had a great start courtesy of Nicole Geddes who gave a stunning rendition of the Australian National Anthem.

The Kangaroos kicked the first goal of the day within minutes of the start of the game, thanks to Daniel Johnson. The Saints hit back a short time later with a goal to Stewart Walker before the Kangaroos got a run kicking the next 3 goals in the space of 6 minutes. But the Saints kept themselves in the contest with a late goal to be trailing the Kangaroos by 11 points at quarter time.

The Saints kicked the first goal of the second quarter courtesy of Mick Viney but, as was becoming a common theme of the day by this stage, the Kangaroos hit back with back to back goals to Mitch Penberthy and Andrew Hawkins. The Kangaroos were hopping as a determined pack and just had the edge on the Saints. Just before the 11 minute mark of this quarter the Saints’ Stewart Walker was Yellow Carded for striking, allowing the Kangaroos the luxury of having a lose man in defence and they immediately slotted another goal. The Saints then hit back with a great over the head snap at goal from young Mick Corcoran. However, with the extra man, the Kangaroos kicked the last two goals of the quarter to have a 25 point lead at half time.

The Saints again kicked the first goal of the third quarter from the boot of Gary Hadland before the Kangaroos hit back with a goal to Andrew Hawkins. The Saints were not going to let the Kangaroos get away with that and kicked another goal. But as was the case so often in the first half the Kangaroos strung another couple of goals together to create the biggest lead in the game of 31 points. Then the Kangaroos had Luke Robinson Yellow Carded for front on negligent contact and after a couple of minutes reorganising the troops the Saints took advantage of their extra man and finished the quarter with four straight goals to trail the Kangaroos by just 5 points setting up a huge last quarter.

The Saints pushed the advantage even further at the start of the last quarter opening up with the first three goals giving them the lead for the first time in the game by 12 points. At the 8 minute mark the Kangaroos regained Robinson and the teams were back playing man on man football again. Over the next twelve minutes the Kangaroos worked very hard to claw their way back into the game kicking 2 goals to even the game up. The game really heated up in the dying minutes with neither team lying down and there was the distinct chance of the game ending in a draw at the end of normal time and sending us into extra time. But with 3 minutes to go the Kangaroos’ 2008 Tony Gilles Medallist, Tim Cotter, kicked a goal to put them 6 points in front. The Saints tried very hard to peg that goal back but they gave a free kick away followed by a fifty metre penalty and the Kangaroos’ Dan Overeem sent the Kangaroos crowd into raptures when he kicked the match-sealing goal with 30 seconds left on the clock. The Saints never gave up though and had the ball in their goal square when the final siren went to thunderous roar of the Kangaroos’ crowd.

The Kangaroos had big grins on their faces as they received the Premiership medals from Senator John Williams, with their first year player Hamish Day being doubly happy when he was named as the Graham Nuttall medallist for the best player on the ground in the Grand Final.

Prime7 is proud to provide the Rising Star Award