A day out at ... Queen Elizabeth Oval 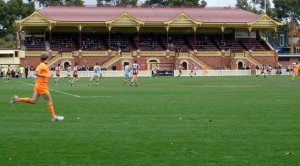 One of the fantastic things about the Peter Jackson VFL is that it is not simply confined to the Melbourne metropolitan area. With teams located in Victoria’s three major regional cities, fans have a great opportunity to get on the road, see a bit of the state, and enjoy some local football with a country twist. Today’s journey was to the picturesque Queen Elizabeth Oval to see Bendigo host Sandringham.

Bendigo joined the league in 1998 as the Diggers, and after some early unsuccessful years, affiliated with Essendon to become the Bombers in 2003. In 2012, Bendigo began acknowledging their true heritage and were renamed the Gold and this year recommenced their journey as a stand-alone franchise.

The day started earlier than usual, with my drive from Melbourne’s east to Bendigo taking about 2 hours. Whilst I encountered rain and wind along the Calder Freeway outside Melbourne, once I had cleared the Great Dividing Range near Macedon I was met with drier more stable conditions. Upon entering the city, you are greeted with the imposing sight of Sacred Heart Cathedral, which looms large over the CBD. Once past this landmark, a left turn up View Street, and we’re at our destination.

Upon entering the venue, the most notable landmark at Queen Elizabeth Oval is the beautiful old grandstand on the eastern wing. The ground was also given a significant revamp in 2011, which included a refurbishment of the grandstand, a new playing surface, improved terraces at the northern end, and an improved electronic scoreboard.

I journeyed around to the outer wing for the first quarter. It was very cold, but quite still and dry, meaning it was a more-than bearable day in central Victoria. Before I knew it, Sandringham had kicked away to a 35 point lead at quarter time. After listening to Aussie Jones deliver his quarter time address to his troops alongside a few other hardened souls, I picked up some fried dim sims and headed to the grandstand.

The second term had more fight from the Gold, and the fans could see it too. There was a little more ‘aggro’ in the crowd as they could see their club putting up a good challenge to the more-talented Zebras outfit. Whilst the crowd numbers were down on the day, the reduction in numbers does not equate to a reduction in passion, and with the lead only increasing to 37 points at the main break, the Gold weren’t done with yet!

At half time I grabbed a beer and a stubby holder from the beer/merchandise tent, which was incredibly convenient. Not so good for the Gold was the second half, with Sandringham increasing their lead to 51 at the final change, and kicking away to win the match by 76 points at the final siren. And with that, I hit the road for the long journey home.