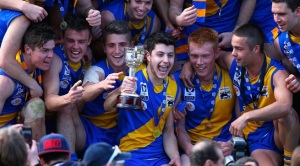 Leading by 37 points at the 11-minute mark of the third term, many would have thought the Seagulls were home - but no one told the Box Hill Hawks.

The Hawks proceeded to kick nine of the next 11 goals to draw scores level at the 26 minute mark of the final term.

As normal time ran out for the final term, both teams spent the next seven minutes searching for the golden score to win themselves a premiership.

Finally a low off target kick for goal from best on ground Josh Bench came off hands and crossed the behind line to produce the one solitary point Williamstown needed to win.

CLICK HERE for the full best players, goalkickers and quarter by quarter breakdown.