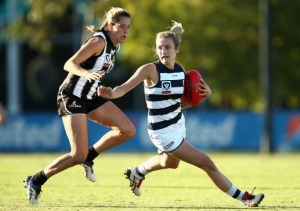 The Victorian Football Women's League announced its full squads for the upcoming 2018 season and AFL Goldfields is excited to have 21 players from local clubs across its competitions that will be competing in the competition this year.

Ballarat Football Netball League is represented by 10 players that have been affiliated with local clubs across the competition; including AFL Goldfields Female Football Manager Krista Woodroffe who will again play for Geelong. She will be joined by Kate Darby, Amy McDonald and Maighan Fogas who also played for local clubs.

Riddell District Football Netball League is represented by seven players including Maddison Gay who represented Rupertswood and Lancefield in A Grade netball.

Williamstown is the VFLW club with the most local representation with eight players from the region making up its list for 2018.

AFL Goldfields Regional General Manager Rod Ward is excited by the high level of local representation in the VFLW competition.

"This is a great sign of the talent coming through our local clubs who aspire to achieve the highest level of football possible, and they will be an inspiration for female footballers across our region that wish to aspire to a higher level in their football careers," Mr Ward says.

"We are thrilled at AFL Goldfields to be so well represented in one of the fastest growing football competitions for talent in Australia."

See the full list of local players participating in the VFLW below.