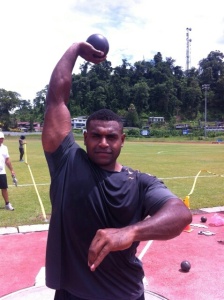 De’Bono Paraka has further improved on his national records in the discus throw and shot put. After breaking through the 15metre barrier for the first time in March with  a 15.07 shot put in Lae , the 23 year old improved his mark to 15.15m on Friday in Port Moresby. This follows a recent 49.72m  discus throw in Lae. Paraka is ranked second in both events in the latest Pacific Island ranking lists behind Alexander Rose from Samoa who won the Oceania Championships in both events with 16.89m and 60.95m respectively.New Caledonia is always strong in the throws and  it is not yet known for sure who will actually take the field in Port Moresby next month.

Delilah Kami from Madang has been training for the womens Pole vault, an event that PNG has never taken up in any international competition. She cleared 2.30m at the Gold Coast recently to set a new national record. However an ankle injury sustained last week doing hurdle drills has resulted in her being flown back to Port Moresby for urgent treatment under the guidance of Simon Morris at the Team PNG HPTC .  Meanwhile KaroIga is going great guns in the mens Pole Vault. After taking up the event last year  Iga has improved to 4.10m and now has Erich Mombergers national record of 4.20m in his sights

Donna Koniel set a new national record at the Gold Coast last weekend in the womens 300m hurdles. Her new mark of 43.29secs eclipses the time of 44.05 set by Afure Adah in the USA last month. Another athlete in great form last weekend was 400m specialist Theo Piniau who clocked big personal best performances in the 100m (10.83) and 200m (21.41). The mens 400m promises to be one of the highlights of the Pacific  Games with the in formKamnielMatlaun who ran 47.6 seconds in Lae last weekend , as well as Piniau threatening to push  defending champion Nelson Stone all the way.Competition for the fourth place in the PNG mens 4*400m relay will be fierce with MowenBoino staking his claim with an impressive 48.6 clocking in Lae behind Matlaun, ahead of Kevin Kapmatana (49.1). WalaGime is also a very experienced relay runner but has not yet run an individual 400m race this season.