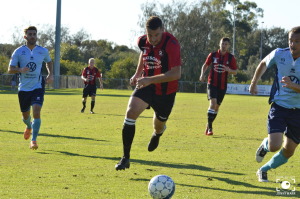 Sorrento missed the chance to return to the top of the PS4 NPLWA after a goalless draw with Armadale at Percy Doyle Reserve on Saturday.

The hosts hit bar, post and had one cleared off the line in the second half after resilient Armadale had a penalty saved and missed chances of their own.

A late rally from the Gulls led to little reward as both teams had to settle for a point.

Sorrento coach Jamie Harnwell was frustrated that his side couldn’t return to the league’s summit.

“I don’t know how we didn’t win today," he said. "We didn’t take our chances and it definitely feels like two points dropped.

“You create your own luck, but we just didn’t have that quality at times.

“It’s obviously positive to still get a result, but we could have been top with three points and it’s frustrating to draw given the performance.

“We didn’t deserve that (to draw), but we just roll on with a big game against Bayswater next week.”

Armadale coach John O’Reilly was equally as frustrated that his side didn’t win the game, but praised the efforts of his improving side.

“It’s hard to walk away feeling too happy when we had a penalty, it didn’t go in and then we end up drawing 0-0,” he said.

“Defensively we’re delighted. We’ve been working hard during the week and it was close to perfect in terms of shape and work-rate, but disappointing we didn’t nick it.”

15 of Armadale’s 19 points this season have come on the road and O’Reilly praised the mentality of his team who are seven points clear of the drop.

“We’re mindful that we want players to come in and fit the mold of what we want to do here,” he said.

“As you saw from the performance today there’s not much luxury. The guys really put it in and they’ve bought into that.

“When we’re away we defend well and wait for our opportunities and that suits us. Maybe at our next home game we’ll wear our away kit!”

The visitors could have taken the lead from the penalty spot inside five minutes when Kyle King was fouled in the area, but James Morgan saved the spot-kick.

Anthony Skorich lifted over the bar from Billy Quinncroft’s lay-off, before Sean Canham headed wide in a first half of few chances.

Ryan Pearson curled an effort against the post and Reece Vittiglia blasted one onto the bar from range as Sorrento turned the screw after the break.

Armadale’s best chance in the second half fell to Quinncroft, who was denied by a brilliant follow-up save from Morgan after he spilled the initial shot from distance.

Canham and Steve McDonald both had headed chances late on which were scrambled to safety as both teams shared the points.