Armadale too strong for Subiaco 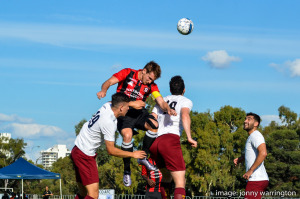 Armadale Soccer Club have come out on top in a physical battle with Subiaco at Rosalie Park on Saturday, with two second half goals securing them an important three NPLWA points.

The match started off in reasonably slow fashion, with Subiaco trying to control possession.

Armadale looked to hit the hosts on the counter attack with front men Papa Kpatar and Joshua Tumoe causing some serious headaches for the Subiaco defence.

The best chance of the half came when the electrifying forwards linked up brilliantly down the right before teeing up Kyle King inside the box. King was denied by a fantastic save from Subiaco custodian Ryan Montgomery, ensuring both sides went into the break scoreless.

The second half started with more action than the first as Subiaco midfielder Jordan Candlish tried to replicate his 30 yard screamer from last week, this time sending it well wide of the near post.

The early scare appeared to kick Armadale into gear as they began to dominate play.

On the hour mark Armadale looked to have rewarded themselves for their dominance as Tumoe sent in a ball from the left for Kpatar, who headed his attempt just inches over the crossbar.

It was only moments later that the visitors took the lead as Tumoe made his way into the box from his preferred left wing and drove one into the top right corner, leaving Ryan Montgomery with no chance.

Momentum had well and truly swung into the favour of the visitors and they doubled their lead fifteen minutes later when midfielder Charlie Kenna drilled one home into the bottom corner.

With ten minutes to go Jordan Pavett latched on to the ball and broke through the Subiaco defence leaving him one on one with Montgomery, who was drawn into a clumsy foul leaving the referee with no choice but to point to the penalty spot.

Pavett stepped up himself and stung one to the right of Montgomery which rattled off the post, but it didn’t matter as Armadale ran out comfortable two-nil winners in the end.

Victorious Armadale coach John O'Reilly was thrilled with his side collecting three points away from home and was proud of the football they played.

“Today we went out with the intention of winning and being the aggressor and that’s exactly what we did”, he said.

Subiaco coach Ian McMurray expressed his disappointment in his side after the game and the lack of desire his players had.

“I don’t think we were in the game, they wanted it, they dominated us at times”, he said.