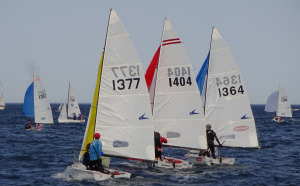 Twenty-seven boats from six clubs started Round 1 of the Port Jackson Championship. A 15-20 knot westerly with strong gusts greeted the fleet as the boats converged on The Sound.

Racing got underway with a clear start on the first attempt. On the first work the lead changed hands several times before 1384 – Don’t Worry (James Pinnington & Liam Karunaratne) took the lead at the first top mark and increased their lead throughout the race to win by over 1 minute.

Despite the windy and gusty conditions, 23 of the 27 boats managed to complete the race and it was ideal preparation for the F11 Nationals that will be sailed in The Sound.

Round 2 will be sailed on Sunday 22 October. It is not too late to enter and participate.