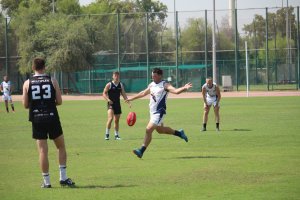 If you thought that the Dubai Dragons’ reign as a power would end with their loss to the Multiplex Bulls in last season’s Grand Final, think again. Rather than ceding their title as the greatest and handing over to a new era of the Bulls, the Dubai Dragons have sent a new message. The past is the past – the future is us.

The eyes of the AFL Middle East world were firmly fixed on Zayed Sports City in Abu Dhabi for the Round 1 fixtures to kick off the new season. The hosts were up first against the Dubai Dingoes, but the match with the most talking points was second up with the Dubai Dragons tackling the Multiplex Bulls.

In a tight match for the first half, both sides threw their all at each other for scores to be level at the main break. An arm-wrestle between past and present powers was underway for the audience to see. However, a four goal to two third quarter for the Dragons gave them wriggle room and they were able to take that further with another five goals to one in the final term.

It was a powerful statement in the second half by the Dragons. Not only did they win their opening match on the scoreboard, they also inflicted paid psychologically on the Bulls. They regained the mental edge in their power struggles of the past few seasons.

Of significance, the Bulls kicked the first three goals of the match, but from that point on it was a dominant Dragons outfit.

The hosts, the Abu Dhabi Falcons, had the advantage of a home match in front of their supporters to kick off the new season. The opening quarter was not only tight but entertaining – as was the whole match – as both teams threw themselves into battle. It was always a highly important match given that most believe that the Dragons and Bulls will again finish top two, so the third place (and finalists) could come from these two teams.

One point separated the teams at the first break, in favour of the Falcons. By half-time they had skipped out to nine points and that remained the margin at the final change. A big final quarter charge, however, from the Falcons saw them sustain pressure – especially defensively – to close down the Dingoes and run out 28-point victors.

After one round of the 2019/20 season, the Dubai Dragons sit back on top of the ladder. But, that position is theirs to lose with plenty of the season to come. Next round will see the Multiplex Bulls up against the Dubai Dingoes at The Sevens Stadium in Dubai. The Abu Dhabi Falcons are at home again, hosting the Dubai Dragons.