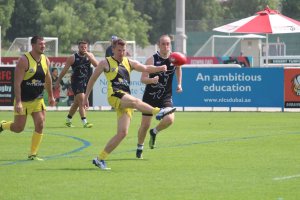 The winning ways of the Multiplex Bulls have continued in the Middle East with the team taking out the 2019/20 Pre-Season Cup after downing the Dubai Dingoes in the final. This follows on from the maiden AFL Middle East premiership earlier this year and sets the scene for another big year for the Bulls.

The big improver from the event were the Dubai Dingoes. After a few torrid seasons without much success, the Dingoes showed that their off-season recruiting, planning and drive has paid off. They contested the final after impressing in their two wins against eventual winners, the Bulls, and a dominant performance against the Abu Dhabi Falcons. Their only defeat was a narrow loss to the Dubai Dragons by just three points.

The event isn’t an accurate guide to what will play out across the premiership season, but it does show where teams are placed to start new seasons. Most importantly, the vent signals the beginning of bigger battles and helps remove the off-season cobwebs.

Early signs, however, point towards the Multiplex Bulls having a big say this season.

The 2019/20 AFL Middle East kicks off in earnest on Friday 25th October, with a double-header at Zayed Sports City in Abu Dhabi. The Abu Dhabi Falcons will met the Dubai Dingoes in a match that now holds significant interest. That match is followed by the Grand Final replay when the Multiplex Bulls clash with the Dubai Dragons.