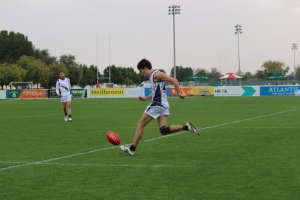 The Dubai Dragons have made their way into yet another AFL Middle East grand final after downing the Abu Dhabi Falcons at Sevens Stadium on Friday. The club has won six of the past seven premierships and now have a unique chance to add yet another in a golden dynasty. Currently they have four flags in a row and eyes on a fifth after winning their Preliminary Final against the Falcons.

Waiting for them ahead of next week’s Grand Final are the Multiplex Bulls. After four successive premiership defeats they will be a formidable opponent, especially after having enjoyed a week’s extra rest as the Dragons and Falcons battled things out.

The Falcons kicked the first goal of the Preliminary Final, getting off to a useful start, however the Dragons kicked five of the next six goals to take an 18-point lead to the first break. The Falcons stayed in touch in the second term, kicking one goal to the Dragon’s two to trail by just over four goals at half time.

The Falcons tried hard and again stayed with the Dragons across the third term, kicking two goals to three. The Dragons went to the final break ahead by 37 points and needing to just break even in the last to win.

Any hope of a Falcon fightback was snuffed out by two Dragons goals to bounce out to an unassailable 49-point lead. The Falcons kicked three of the next four goals to bring the margin back, but the Dragons held on for a strong 43-point win.

As mentioned by the Dragon after the match, the score-line did not reflect how well the Falcons fought, but now they wait and rebuild for next year.