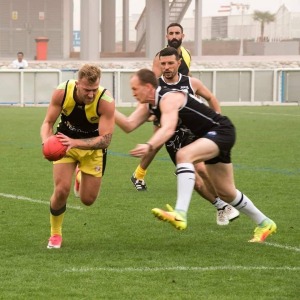 The weather in the Middle East resembled in one aspect where the sport originated from with rain and blowing gales, while it also represented where the game was played in respect to the thick dust in the air. The final round of the 2018/19 season offered so much yet in reality delivered what was expected.

The opening game between the Dubai Dragons and the Abu Dhabi Falcons had plenty of bite in it with the Dragons playing to secure what was hoped to be a direct entry into the grand final whereas the Falcons were fighting to play another week of footy. With the wind blowing towards the Dragons end to begin the match, they did not fail to use it – kicking 5 goals to nil. By the second term however the rain began to fall which made conditions difficult, yet like any good team the Falcons redeemed themselves early, with goals to Daniel Ferrari and Zac moon placing the pressure right back on the Dragons. With pressure and frustration starting to get the best of both teams, tempers flared resulting in some poor decision yet both Thomas Saunders and Luke Bryon pushed through this to level out the quarter with a goal respectively.

The second half was a completely different story yet a similar theme with wasted opportunities owing to the weather seeing the away side not kick another major for the game whilst the home team smacked on another 7 goals (three then four). Lead up target Daniel Gribbin placed himself in pole position as the leading goal kicker before the final round, whilst the usual roving expertise of Jono Bannister and James Hedrick aided with three and two goals respectively. These teams will now face off in a rematch on the 15th in the league’s inaugural Preliminary Final at the Sevens Stadium.

With the target set by the Dragons at just over 6 percentage points on the ladder, the challenge and goal was in sight for the Multiplex Bulls whereas the ever respectful Entertainer Dingoes knew what they needed to achieve to make a return to the finals scene.

The Bulls recognised they had to come out charging to stamp their authority on the game and they did in such fashion they managed to kick six straight goals to two behinds in the first - which was reminiscent of the starting game. What the scoreboard showed did not actually reflect what was happening on the ground, with the dingoes’ midfield and defenders putting up with a barrage of forward pressure from the Bulls with Captain Ben Dawson rebounding as quickly as he was getting it.

The Bulls continued to apply pressure in the second with Nathan Holly plying his trade up front having kicked 5 goals to half time. The dingoes managed to convert two majors with the wind by the end of the half with Paudge Brennan kicking after the siren to convert and give the dingoes something to build on in the second half.

With music blaring, the teams came out after the half with a feeling in the air that there was more work to be done by the Bulls whilst a small glimmer of hope remained for the Dingoes. This unfortunately was not the case and the Bulls went on to kick another 6 goals with only one minor blemish in the trying weather. The dingoes went into the final huddle knowing that the year was done, but as true battlers they mustered up the courage to take on a goliath opponent. Nathan Holly continued his dominance for the game and placed his golden boots on taking home a bag of 10 goals and the league’s leading goal kicker. In a more sombre note to the end of the game, it saw Bulls stalwart Andrew Walter retire on top seeing his faithful Bulls through to their next grand final appearance!

The road to the Sevens will be the shortest for one team or the longest bus ride home for the other. We will see what is ahead of us with the Dubai Dragons taking on the Abu Dhabi Falcons on the 15th of March, at the Sevens Stadium for round 1 of the finals for 2019.