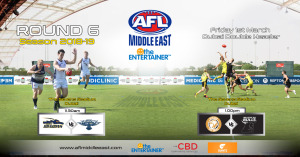 On a purely win/loss basis, the final round of the AFL Middle East season won’t have too many surprises. Based on season form (and barring remarkable upsets), the Multiplex Bulls should be too good for the Dubai Dingoes and the Dubai Dragons are unlikely to drop their game against the Abu Dhabi Falcons despite a narrow result last meeting.

The devil is in the numbers. If the Dragons absolutely hammer the Falcons, and the Bulls only just get home against the Dingoes, it is possible for the Dragons to grab the minor premiership and avoid an elimination final ahead of a possible grand final.

The Bulls hold a 6.5% lead over the Dragons on for and against, and will be keep to retain that and take the minor premiership.

The Abu Dhabi Falcons need only put in a serviceable performance in their match and either score an upset win or at least mitigate the scoreboard damage to play finals. What they don’t need is to fall apart at this hurdle and be wiped off Sevens Stadium by a cricket score.

This scenario is precisely what the Dubai Dingoes ARE hoping for. For the Dingoes to bridge the 28% for and against differential and claw their way into a final, they need something apocalyptic to happen to the Falcons (on the scoreboard). It is incredibly unlikely, immeasurably improbable, the stuff of very imaginative fairy tales – but it isn’t impossible. That is how the Dingoes will have to play – as if there is the barest glimmer of hope. Of course, beating the Bulls would be easier in a scoreboard sense.

The final round promises to see some grand football, one way or the other. Whilst upsets are not terribly likely, the sheer mathematics of results will make this one exciting finish to a home and away season.

After this round, the second and third placed teams will play a Preliminary Final in Dubai on March 15th, followed by the Grand Final on March 22nd.