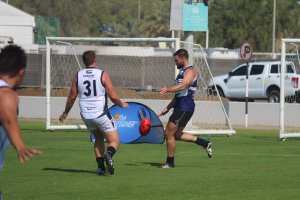 After having enjoyed their winter break, the AFL Middle East teams return to the field on Friday for their Australia Day round. With three rounds remaining, all teams can book a place in finals if they can win all remaining games and it starts Friday at the Dubai Sports City with a double-header. The Multiplex Bulls will meet the Abu Dhabi Falcons whilst the Dubai Dragons play the Dubai Dingoes.

The Bulls sit in second place with two wins. Another win against the Falcons will almost certainly ensure them a grand final berth. But it won’t be easy. The Falcons sit on the bottom of the ladder winless, yet have played far better than that position suggests. Should they upset the Bulls it will give them momentum to win all remaining games. The Bulls start favourites, yet the Falcons will be determined to turn their season around.

But the round is also defined by mathematics. Wins to the favourites will almost certainly determine the grand finalists. Wins to the underdogs will make the rest of the season exciting. It promises to be a great Australia Day round for all concerned at the AFL Middle East.