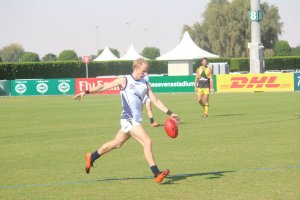 The favourites won their AFL Middle East matches in Round 3, with the scoreboards showing emphatic wins to the Dubai Dragons by 59 points over the Dubai Dingoes and the Multiplex Bulls by 33 points over the Abu Dhabi Falcons. The matches marked the midway point of the season and the final games for 2018. But, more significantly, each match could have been so much different but for one quarter.

Down in the capital, the Abu Dhabi Falcons gave the Bulls a ferocious welcome. The Falcons came out on fire and gave the Bulls a devil of a time, kicking five first quarter goals and holding a decent 17-point lead at the first break. By half time, the Bulls had fought back to lead a tight clash by just two points.

The final quarter was won by the Falcons by a single point. But the damage was done in one quarter by the Bulls as they hammered home seven goals to two in a powerful third term. The Falcons held their own for the rest of the day, but would just love the chance to replay that third quarter again.

Back in Dubai, the reinvigorated Dingoes threw the kitchen sink, and most of the cutlery, at the Dubai Dragons. With scores level at the first change, and the Dragons ahead by just three points at the main break, the second half was set to be huge. The Dragons played the better in the third term, but with less than two goals separating the teams at the final change, the game could go either way.

But, like the Falcons, the Dingoes will rue their final term.

The Dragons unleashed another “inner dragon” and hammered on seven unanswered goals in eight minutes to kill of the game. The awesome display was a team effort, on their way to a ten goal quarter which saw them win by almost 10 goals. Everyone contributed, but Dragon Matt Burn became the chief catalyst for the damage kicking five of his six goals for the day in the final quarter – four of those in a withering burst of less than four minutes.

All teams can now regroup over the winter break, reconvening for Round 4 on Friday 25th January. The Dragons are again almost assured of a top two finish with three wins from three. The Bulls are also well on track with two wins. The Dingoes are still in the mix in third place with one win, whilst the Falcons remain winless after eleven competitive quarters and one they would rather forget.

Both the Dingoes and the Falcons will go to the break wondering how different things might be but for one quarter of footy.