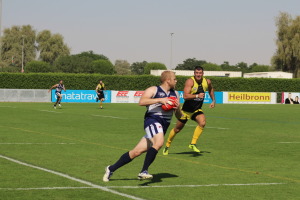 The opening round of the new 2018/19 AFL Middle East season got underway yesterday in Dubai with two tight matches which produced two significant results. The Dubai Dingoes came out snarling against the Abu Dhabi Falcons, whilst the Dubai Dragons won a thriller against the Multiplex Bulls.

In the opening match on a hot morning at the Sevens Stadium in Dubai, the Dubai Dingoes got their bark back and put a serious bite on the Falcons. In a tight opening half, it was the Falcons getting their noses in front to go to the main break with a seven point lead.

The Dingoes came back out after the break with renewed spirit – conscious that their new season needed a positive start – and rammed home eight goals to five after half time to win the game by 2 goals. It wasn’t the start the Falcons were looking for. After the promise of last year they needed a good start to the season. However, the Dingoes would be delighted with the win after a tough season in 2017/18. Already they are in a position to challenge for finals later in the season if they can snare another couple of wins.

In the second match of the day, the battle between the two best teams of the past few years continued. The Dubai Dragons and Multiplex Bulls have dominated the competition for the past few years, and the Dragons have enjoyed great success. However, results have always been close.

The pattern continued with another Dubai thriller. Little separated the two teams in the first half. By the main break, the Dragons had snuck ahead by just two points. The second half was just enthralling as the Dragons tried to consolidate their lead and the Bulls tried to peg it back. By the end of the match it was the Dragons holding on by just three points, setting up their season and continuing the heartbreak for the Bulls.

The next round of matches on November 23rd will see the Abu Dhabi Falcons hosting the Dubai Dragons whilst in Dubai the Multiplex Bulls will take on the Dubai Dingoes.