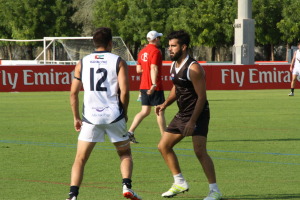 History never repeats, so the song goes, but that wasn’t the case in the AFL Middle East Grand Final rematch between the Dubai Dragons and the Multiplex Bulls, the crunch match of Round 2 over the weekend.

And so it proved as the champion Dragons torched the Bulls once again, although only by a slender 11-point margin.

Played Friday afternoon at The Sevens, conditions were very hot under the desert sun but with a slight breeze across the pitch.

The Bulls were dealt a big blow before the ball-up with Jon Hickey, who kicked five goals in Round 1, unavailable to travel.

Just as in last season’s Grand Final it was a very physical game from the start, with the intense rivalry between the two clubs growing in every match.

The first and second quarter were an arm wrestle, but the Bulls’ six-pointers seemed to come a bit easier through some quick, clean ball movement out of the middle, while the Dragons had to scrap for their majors.

After half-time, however, the Dragons started to win the contests, as the game started to shape up as a mirror image to last season’s decider.

The Dragons got on top in the third quarter with debutant Darcy O’Sullivan lively up front and second gamer Chris Burke winning plenty of ball in the midfield By three-quarter time the Dragons had turned it around to lead by 21 points.

The proud Bulls were desperate to stop the repeat and came storming home with big man Nick Burchell intercepting every ball kicked to him and the midfield of Joseph Yodgee and Jack Egan finding acres of space.

In the end the Dragons could only manage a single behind to the Bulls’ one goal five points in the final term, but it was enough for the premiers to hold on to a 9.9.63 -7.10.52 triumph.

In the round’s other match, the Dingoes’ slow start to the season continued as they went down by 43 points to the Abu Dhabi Falcons in the capital.

Making things very tough for the Dingoes was the fact they only had 11 players who could make the away trip.

The home side came out firing and put seven goals on the scoreboard to the Dingoes’ one in the first quarter.

It was looking like another big loss for the Dingoes with the second period much the same as the first and the Falcons taking a comfortable 53 point lead into the half.

For the Falcons, utility Zac Moon was very dangerous up forward and veterans Stephen James and Rhys Watkins were getting lots of ball in the midfield and across half-back.

To the Dingoes credit they took it to the Falcons in the third quarter, with captain Ben Dawson starting to find some ball, which he converted to four majors, and their defence keeping the Falcons to just one goal.

The Falcons were not helped by the fact their club stalwart and president Ty Farrell went down with a serious knee injury five minutes into that third term.

The game was over in the last quarter but the Dingoes gutsed it out strongly with only one player on their bench and ended up outscoring the Falcons in the second half. The final result was the Falcons 17.14.116 to Dingoes’ 11.7.73.

Round 3 will be played over November 23 and 24 with the Dingoes facing the Dragons and the Bulls up against the Falcons.

Thanks to Alex Broun from www.sport360.com for the article