The Art Of Being Champions 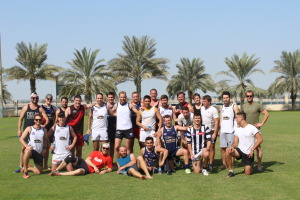 One of the hallmarks of a great dynasty is to understand that change is inevitable and be able to absorb change and continue forward. It is what has powered great nations and cultures over time and a similar process occurs in sport.

The Dubai Dragons – winner of five out of the past six AFL Middle east premierships – is in that position now. They may be at the end of their great reign, or they may be on a solid plateau set for another year of greatness. Time will tell, but one thing that is certain is they have embraced change over this past off-season. How they respond will determine whether the new season brings more glory or the start of a new phase of rebuilding.

The club is acutely aware of this and is addressing needs. Iain Rowe, president of the Dubai Dragons, offers his insight.

“The Dragons have had a great off season and celebrated with another mystery international end of season trip. [We]have had a few retirements from some long-serving players and it's been a challenge to replace such talent, however, after a good recruiting season over the break, the Dragons will be bringing some young blood back into the squad.”

“The team has been training well over the past two months and are ready for the season ahead. We know we are 'the hunted' team once again, however, we are not in unfamiliar territory. We are ready for all of the challenges the competition throws at us. Bring on the 2017-18 season!”

They are ready. Or, at least, as ready as they can be for the challenges of the new season. The Dragons are aware that their cross-town rivals – the Multiplex Bulls and Dubai Dingoes – are out to bring them down. They also know that the Abu Dhabi Falcons are building. They also have an eye to the development of other past and present teams as the AFL Middle East competition once again changes according to the regional political, economic and social climates.

Iain says “the Dragons hope Doha, Muscat and Bahrain can bolster their teams and get more involved in the AFLME competition in the current climate. Good luck to all teams this season.”

Clearly the Dragons start favourites, but with the season kicking of tomorrow (Bulls v Dingoes) – the Dragons meet the Falcons in Dubai on Friday – there is no waiting. New season patterns will emerge as early as tomorrow. Some questions will be answered immediately – others will take longer. That is the art of being champions.

But one thing is certain – the Dubai Dragons will not fall victim to surprise. They have spent the off-season preparing for that change and Round One will tell them how well they have prepared.