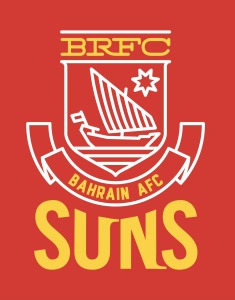 During the 2009 AFL Middle East season, the Bahrain Blues first entered the fields of footy battle when they played in the Dubai 9’s tournament. By later that year the nation’s Australian Rules football team was a part of the AFL Middle East competition proper. Big things were possible and the sky was the limit.

Then came the “Arab Spring”, a period of political turmoil across much of the Middle East and northern Africa, which saw massive protests and clashes across many nations. Bahrain itself was a part of this. The island nation off the coast of Saudi Arabia saw clashes and the unsettled nature of the events between 2010 and 2012 (predominantly 2011 in Bahrain) saw the landscape change for footy as many ex-pats once involved in creating the Blues left the nation and Australian Rules football, as with other endeavours, stalled.

By 2011 the Bahrain Blues were part of history. It was problematic as to whether or not another team would grow again in the nation.

But, like all good phoenixes, footy in Bahrain is on the way back. They will not play this 2017/18 season, but the new entity (likely to be called the Bahrain Suns) is on track for the following season. It is currently running at the Bahrain Football Club.

The new club’s co-founder, Shannon Crockett, added some insight. “Kolija and myself have been trying to get Bahrain back up and running to rejoin the league since Grand Final Day 2016.”

“Bahrain has not been in the comp since the Arab Spring. During this time, many Australians left the country. Only two players from the original team are still in Bahrain.

We started getting the word out and social light training sessions in January. However, to try and get 15 committed blokes to play for a full season, has proven to be difficult. We managed to host our first game against the Australian Navy for ANZAC Day.”

“We have enough players to fill a team locally but not to travel at this stage.”

We have offered [the AFLME] that we would be happy to host any practice matches or lost fixtures over the coming season. We will continue to train and try and regenerate the club for the 2018/19 Season.”

To have Bahrain back into the AFL Middle East fold would be a huge bonus for the game, and certainly for the league. It would also be a great achievement for the committed people behind the scenes and on the field after having negotiated much instability and uncertainty to return again to the fields of football action.

This season, Bahrain will be an interested spectator, but by next season they will expect to right in the thick of the action.