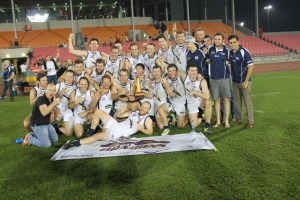 One has to have some respect for those who write the draw for the AFL Middle East competition. Far from being a simple Team A v Team B and repeat competition, the Middle East throws up a unique set of challenges to have teams play matches once, much less for a whole season.

But the fact that they do so every year is evidence of the passion with which the people involved in the AFL Middle East competition operate.

Whilst four of the teams are located within the United Arab Emirates – the Dubai Dragons, Dubai Dingoes and the Multiplex Bulls are each based in Dubai and the Abu Dhabi Falcons are located 140 kilometres to the south-west. If it were just those four clubs thing might be relatively easy – but there is more.

The Doha Kangaroos from Qatar are almost 700 kilometres away by road, the journey taking them from Qatar to the UAE via Saudi Arabia. Apart from any amount of time (hours travelling), technical (vehicles) and cultural (national borders, passports) to travel by road, it is simply easier to fly. Easier, but also very expensive to move an entire football club overseas for every away game. To write a draw to accommodate the logistic of the Doha Kangaroos is a huge task.

A team from Bahrain will not enter the AFL Middle East competition this season, but they are building numbers to re-enter later. The 2017/18 season might yet see them host a couple of practice matches for other clubs or simply just be there for weekends away and maybe a footy packed in the luggage. As it is just under 950 kilometres to travel by road from Bahrain to Dubai, flying is the only reasonable method of getting teams around. Until sponsorship can be found to allow this travel on a semi-regular basis, Bahrain will quietly build in the background.

Muscat, in Oman, has a similar problem. Whilst only a comparatively closer 450 kilometres from Dubai, Muscat is still in a position where costs, player stability and cultural/travel considerations come together to make it difficult for the Muscat Magpies to compete. They also will be missing from the AFL Middle East draw for this season. An International Rules tournament might be possible in early 2018 that might help potential player numbers and promotion of the game, though that is a long way from coming to fruition yet.

Certainly there is much to consider when bring together teams from four nations in a part of the world that is a long way from the roots of the game. Yet each year a draw is achieved. At this stage the Round One match is likely to be October 20th – a little under a month away. Between now and then all of the finer details of an AFL Middle East season will be considered and acted upon.

Then clubs can start the process of finding the Dubai Dragons’ Achilles Heel – if there is one – and bring down a dynasty. The Dragons have won five of the past six flags (the past three in a row) to boast an incredible era of success. The sequence has only been broken by the Doha Kangaroos in 2013/14.

But if the Kangaroos found a way then so can the other clubs, and that is what will make this such a fascinating new season.

Thanks to Wesley Hull from World Footy News (http://www.worldfootynews.com) for this article.