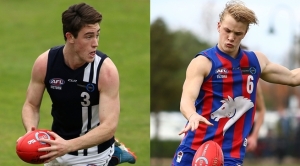 All games will be on TAC Cup Radio

Sandringham will enter this match confident following last week’s comprehensive defeat of minor premier Dandenong and as the only team not to have been beaten by the Falcons in 2016. In Round 12 at Avalon Airport Oval, the Dragons came from 15 points down at half time to pip Geelong by six points.

As they often have this year, the Falcons won the battle in the contests that day thanks to the likes of their captain Jack Blood, Lockey McCartney (pictured, left) and Jack Bennett, but both teams will have their state representatives in action this time around. The landscape will look different with Geelong’s James Worpel at the feet of 201cm ruckman Sean Darcy, setting up a battle with Sandringham big man Lachlan Filipovic and his midfield teammates Corey Lyons, Andrew McGrath and Will Setterfield.

The Dragons will need to establish control of the ball – as they did so successfully against the Stingrays – to protect a relatively undersized defence led by Connor Larkin and Ari Sakeson, as the Falcons have a range of forwards to keep an eye on, with Brett Blair (five goals against North Ballarat two weeks ago), Hayden Elliot, Jack Henry and Zach Zdybel all dangerous taller goalkicking options.

The Chargers have made a habit of mowing down highly rated teams in finals after finishing in the lower reaches of the top eight over the last two years, and Murray is next in their sights. The Bushrangers only have to look back to the final home-and-away round when Oakleigh finished strong to defeat them by 14 points at Norm Minns Oval to start feeling nervous about this clash.

A dangerous multi-pronged forward line was one of the keys for the Chargers that day, with smaller types Dion Johnstone and Josh Daicos and taller options Pat Kerr and Nick Larkey combining for seven of their 11 goals. That same foursome produced eight of Oakleigh’s 12 majors in its victory over North Ballarat last week, and Murray will need the likes of Ryan Garthwaite and Zac Sproule to perform vital roles in defence.

The Bushrangers boast potency inside 50 too though, with Trent McMullan (five goals) and Lachlan Tiziani (four) stars of their Qualifying Final win against Dandenong and big men Todd Marshall and Esava Ratugolea ever-threatening. That all places huge importance on whether Will Brodie and James Cousins can lead Murray to midfield success over Chargers such as Campbell Lane (pictured, right) and Lachlan Walker.