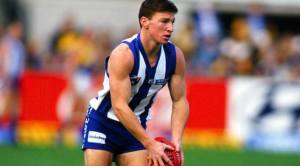 The speedy 167cm man known as ‘Boomer’ will celebrate the rare milestone when the Kangaroos travel to the Gabba to face the Brisbane Lions on Saturday night.

The 37-year-old was drafted from the Northern Knights at pick No.47 way back in the 1995 AFL Draft after winning the best-on-ground medal in Northern’s TAC Cup premiership triumph that season.

The 1999 premiership player is a member of the North Melbourne Team of the Century and is a four-time All Australian and five-time Kangaroos best-and-fairest winner.

In a bumper weekend for AFL milestones, the following former TAC Cup and Peter Jackson VFL players will also notch up important numbers of games played: