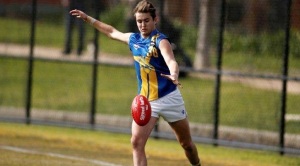 Going by recent form, picking the winner of Sunday’s second Elimination Final between the Western Jets and Murray Bushrangers is near impossible.

Differing form by both teams in the lead up to the match shows how even the TAC Cup competition is this season, as both sides have an equally good chance of advancing to a Semi Final next week.

Western Jets enter their finals campaign not in ideal form following a 59-point loss at the hands of Sandringham last week.

Despite the disappointing loss Western Jets Talent Manager Shane Sexton said they are not dwelling on the match, just focusing on this week’s game.

“The loss was a bit of a wakeup call but our kids have been really, really good all year, we’ve been very competitive so I don’t think we’re necessarily concerned about that,” he said.

Prior to that loss Torin Baker’s team had won three consecutive matches to secure their finals place after missing out last season.

And Sexton said the team wouldn’t be approaching Sunday’s match any differently to the way they have other games this season.

“Anyone that takes any game of TAC Cup lightly is pretty foolish; we’ll be taking it as though they’re the most dangerous team we’ve played all year.

“We’ll take the game on, protect the ball a bit better then what we did last week and we should be in with a good chance.”

Their opponents Murray Bushrangers come in to the match on the back of a thrilling victory over the Northern Knights last week.

It has been an up and down year for Murray as they found themselves battling to secure a finals berth after previously sitting in the top four.

Three heavy defeats from rounds 14-16 meant they were in jeopardy of losing their place in the eight until last week’s three point win.

“We’ve got an outstanding group of young men this year, and I know everyone probably thinks the same but we feel our boys probably deserve a crack at finals,” he said.

“At different times this year we’ve shown we can match it with the best teams in the competition and we’re certainly not going in just to make up the numbers.”

When these two teams last met, it was the Jets who took the points, comfortably winning by 63 points back in round eight.

David Iaccarino, James Sicily and Liam Duggan, were influential last time round and will need to be at their best again if they their side is to win.

For Murray, midfielder Michael Gibbons will once more be very important to his team’s chances.

Gibbons continues to accumulate the footy, he had 36 possessions last week and has had 30 or more disposals in three of his last four matches.