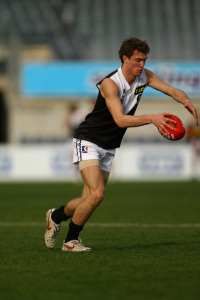 A polished North Ballarat Rebels outfit capped off a terrific team performance with a 67-point victory over Northern Knights at Eureka Stadium on Saturday, as Ben Guthrie reports.

The Rebels imposed themselves early on the contest with six goals to three in the first quarter, winning numerous clearances and capitalising on the scoreboard.

Rebels midfielder Brad Crouch was terrific through the middle of the ground, supplying drive in the contested situation as well as outside run and carry.

He was ably assisted by Sebastian Ross who linked up well between the arcs and delivered the ball inside 50 with aplomb.

“First ten minutes were fantastic, and we sort of took our foot off the pedal at about the 15 minute mark of the first quarter, which was credit to Northern who fought hard,” Loader said.

Loader stressed the importance of his team being a competitive side to play against in all situations.

“Every week we aim to be a hard side to play against, so while we’re doing that we’re all happy,” Loader said.

Their midfield was a key feature of their game, along with their potent forward line including Nick O’Brien (five goals) and Sam Dobson (four).

O’Brien provided a lead up target to the ball carrier, while Dobson was isolated inside forward 50 where he used strength and body positioning to win contests.

For the Knights, Nick Maric played a lone hand up forward with five goals and looked dangerous all day.

Maric is speedy when the ball hits the ground and can also take a strong mark for a player of his size.

While through the midfield David Morris worked tirelessly all day, regularly winning his own ball and setting up team-mates.

The Rebels’ used quick and clean ball movement to their advantage for much of the game, which was the catalyst for their dominant opening.

They worked hard as a team to block and create for others, and were generously rewarded on the scoreboard.

The Knights were comprehensively outplayed early, but to their credit they fought hard to stay in the contest.

Northern at least dug in and made it a little difficult for North Ballarat to execute their offensive manoeuvres.

In the end, it was the overlap run of the Rebels that was the difference and combined with their potent forward line they were able to record a much deserved victory.