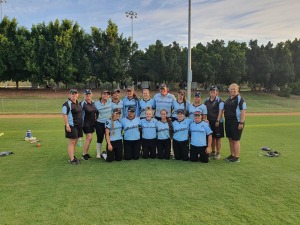 With the State Championships postponed in January due to COVID-19 and then washed out in early February, the U23’s finally got their chance to play on the last weekendof February. They played seven games in the rain and heat and tackled everything that was thrown at them. They fought hard as a team each game and showed us what they are made of.

Head Coach Sarah Jones said of the players"it was a pleasure to coach every one of you. From the players and I would like to thank Kelly (Assistant Coach), Lozz (Manager) and Sylvia (Scorer) for all their help and support throughout the weekend. You guys are amazing! Thank you".

Sarah was assisted by Kelly Gentle who said that in her first experience as a coach for SSSA she "could not be prouder of the athletes and staff and am humbled to have been part of the team".

It was a challenging and the ever moving campaign towards the state championship tournament however, the players all stayed focused, positive and kept the underpinning motivation of being their best while enjoying the game of softball in the front of their minds.

The players showed great resilience in accepting the changes in scheduling and rescheduling of the tournament due to circumstances beyond our control. Unfortunately the squad lost a few players through these changes including Shannon Keevers, who was understandably required to be at the Aussie Spirt training camp in preparation for the 2021 Tokyo Olympics, fingers crossed. Over the rescheduling period, they gained Teina Leung and Ripeka Hvass who rounded out our team for the tournament.

The team had a number of milestones and notable achievements over the weekend that should be highlighted and remembered. If we miss any, please accept our apology (we would love to hear your story if it isn't mentioned it here).

- Jayde Jenson: Played in her 20th representative team (she’s not even 20 yet)

- Sarah Deiner: Played in all 7 games and gave her heart, soul and body to the team. She was also named the players player by our team for the tournament

- We had two sets of siblings playing and supporting each other and the team in Breanna  & Gia-Luise Palma and Teina & Patricia Leung.

- We had, the youngest player participating in the U23 tournament in Abiie Purvis, who played in most games.

- As mentioned previously, Ripeka Hvass and Teina Leung stepped up into the team only a week or two out from the tournament, managed to learn all the play and gave a huge effort in a very short time frame

- Lauren Hodgson (Lozz), our trusty manager, kept us fuelled  with COVID safe Lollie bags and up to date with the many many many changes to the tournaments and draws

- Siliva Kohut kept Sarah and Kelly up to date with stats and noted 1x Batting out of order and 1x illegal substitution into games... as well as kept score for our internal team challenge. What a Pro!

The athletes and staff repressed SSSA with distinction and displayed a high of sportsmanship towards all participants and officials.

To say the least, it was an eventful experience for all and the entire team thank the SSSA for allowing us to be part of this amazing team. We all look forward to doing it all again in the future.