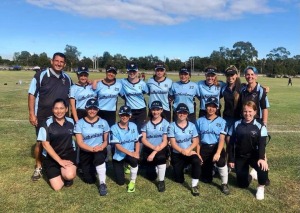 We asked for expressions of interest for this side before the end of last season and have delayed the start of our preparations 3 times due to COVID restrictions. When confirmation of the Tournament going ahead my and team members other Representative commitments left us with no time to schedule training. So we had 4 weeks lead in to get them ready.....

Firstly I would like to acknowledge some people who stepped up at the last minute to complete the Staff and Playing Roster.
• Tina Lutke Manager
• Jayde Jensen Assist Coach replacing Bria Toohey 5 days before State who had to pull out due to work commitments
• Team Parker(Chucky and Kellie) our Statisticians
• Lily Hicks from the Tigers Club who become our 11th player on the Thursday before State
• Sherwyn Vaha who helped at training
• Great group of parents who were extremely patient with the 1 million on again off again text messages I bombarded them with and always able to help.

The team was always going to have a uphill battle with the small amount of training beforehand but I can say the staff managed to get every player on the field for even game time and got them all to play in their nominated first position on multiple occasions.

Tori Katsinas - Lefty, solid batting effort and involved in more than one double play turning into quite a solid player
Carina Gamo - Great with the bat, learning debut pitching effort, lightning fast around the bases supportive team member
Sofia Piovesan - Developing catching effort as the team needed her to step up, took some great catches as well queen of supporting her team,  with belief in her own abilities she will go far
Lucy McLellan - Team signal and bunting expert, versatile in the field, topped of the Tournament with a massive hit in the last game matched with a smile which took a while to disappear....
Tiarna Cutrupi - solid effort at second base lead to several outs, quick around the bases, improved with the bat but won’t shut up soo noisy.....
Tiana Koroneos- Developing with the bat which came together in the last game with some good pieces, contributing in the field with some great stops and catches happy with her progress
Markenzy Vaha - our finishing pitcher whom at her first opportunity took out the opposition in 11 pitches to close out the innings, wasn’t doing much with the bat and in game 5 put a ball into the next postcode with a monster hit
Alex Svolos - great improvement in all facets of her game but her batting was consistent with some big hits for several RBI’s solid performance
Lily Hicks - the SUPER SUB who’s debut performance had some notable efforts and a few spectacular outfield bomb catches to the dissatisfaction of opposition batters
Chloe Lutke - Stellar pitching effort and by far the best tournament on the mound she has ever had, solid with the bat supporting her team with encouragement
Maya Gillies - spectacular with the bat which is no surprise, complimented and contributed to the teams pitching success rock solid performance behind the plate directing the field like a pro, with commendable impressive level of positivity towards her team mates well beyond her age

This is a great group of players who will be knocking on the door for selection in the 2021 U16 side! I’d like to thank the SSSA for giving me the opportunity to be involved with such a great bunch of people again. Thanks to Barry Rumsey for his efforts with our battery players!